Rabbi Jeffrey Leynor (L) and Jim Myers (R) have worked together for over thirty-years exploring Jewish and Christian belief systems, beginning with their common origin in the Late Second Temple Period. However,  as they followed the evolution of their religions from a Temple Religion of the first century to their two monotheistic religions that exist  today, they became aware of the role the brain plays in turning belief systems into the realities that humans view their worlds and give meanings to what they perceive. And they also became aware of how words have been weaponized today in order to manipulate those functions of the brain to get people to do what the people using those weapons want them to do -- without knowing their brains  have been hacked. 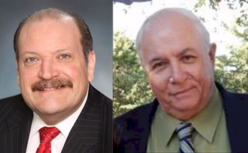